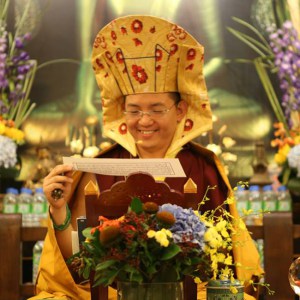 The previous Gyalton Rinpoche, Orgyen Jigma Chokyi Senge Gyalton Rinpoche (1908-1970), was the spiritual head of Chungpo monastery in Eastern Tibet. He was one of the principal students of the 11th Tai Situpa, and of Dzongsar Khyentse Chokyi Lodro. While in Tsurphu Monastery, the seat of the Karmapa, the 16th Karmapa  bestowed on him the title of Khenchen, meaning Great Learned One, as did Dzongsar Khyentse Rinpoche and Choling Rinpoche in recognition of his high attainments and learning. The present, seventh reincarnation, Karma Palden Lungtok Trinley Rangye, was born in Sikkim and identified as Gyalton Tulku in 1983 by the Tai Situpa and shortly after enthroned in the palace temple in Gangtok, Sikkim. Rinpoche speaks fluent English, Hindi and Nepali and is perfectly at home with Western cultural norms